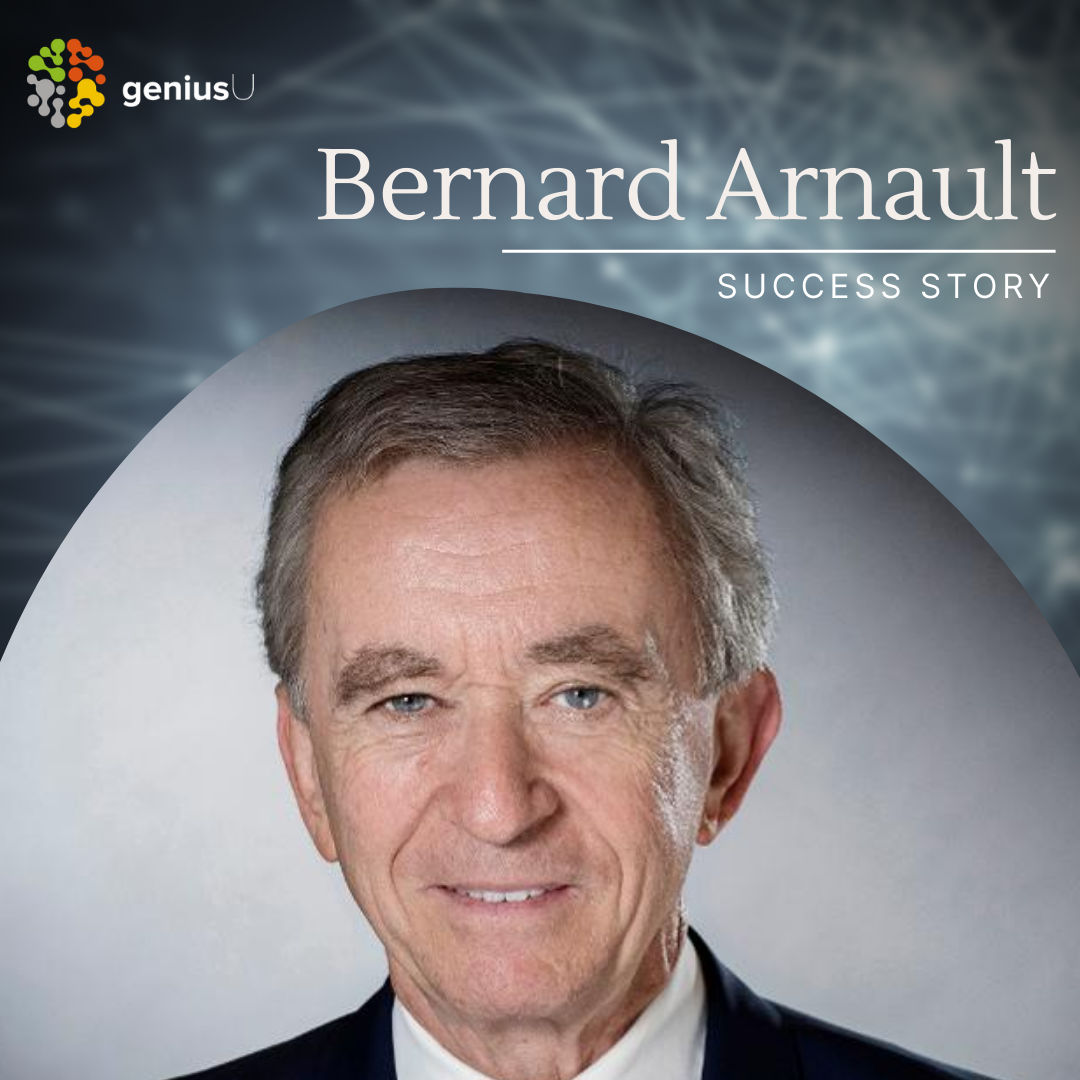 Known as the Pope of Fashion, Bernard Arnault is now the world's third-richest man, overtaking Bill Gates, according to Bloomberg.

Chairman and CEO of LVMH (Möet Hennessy Louis Vuitton), he is an art lover who reinvigorated Christian Dior and built a luxury brand empire worth billions. We look back at his life – both his successes and battles.

An engineer by education
Born Bernard Jean Etienne Arnault on 5 March 1949 in Roubaix in Northern France (pictured), Arnault went to school in Roubaix and Lille before studying engineering at the Ecole Polytechnique in Paris, graduating in 1971.

Company president by 30
He went to work for his family’s construction company, Ferret-Savinel, as an engineer. Within three years he had turned the company’s focus to real estate under the new name Férinel, becoming a director in short order and president, replacing his father, by 30.

Entering the fashion world
In 1984 Arnault left Férinel and bought near-bankrupt textile company Boussac, stripping all its assets bar department store Bon Marché and fashion house Christian Dior – undoubtedly his best investment, although at the time it was stagnating.

Taking over at LVMH
A feud between the houses of Möet Hennessy and Louis Vuitton led to Arnault stepping in to mediate in 1987 after the two businesses merged. Backed by the Irish brewers Guinness, Arnault (pictured on the right with LVMH's then vice-president Alain Chevalier) became LVMH’s biggest shareholder, assuming control as chairman and CEO just two years later.

Shopping spree
Arnault quickly expanded LVMH with a series of luxury acquisitions, always kept deliberately decentralized from the parent group: Céline in 1988, Berluti and Kenzo in 1993; perfumer Guerlain in 1994; Loewe in 1996; Marc Jacobs and cosmetics department store Sephora in 1997; Thomas Pink in 1999; Emilio Pucci in 2000; and Fendi, DKNY and French department store La Samaritaine in 2001. There have been a few surprises amongst the luxury brands in Arnault’s sprees. In 1993 when he bought Berluti and Kenzo, he also bought the French newspaper La Tribune. He sold it then snapped up Les Echos and Le Parisien.

Despite being a decidedly French group, Arnault wanted a grand US presence for LVMH. The 23-storey sculpted glass LVMH Tower (second from left) opened on 57th Street in New York in 1999, with a Christian Dior boutique on the ground and first floor; a flagship American headquarters.

Gucci: the one that got away

In 1999 Arnault began what the New York Post has described as “the bloodiest fight in fashion” – a “creeping takeover” bid for Gucci. When his shares topped 34%, Gucci retaliated by creating an employee stock option plan to dilute his stake. Gucci then sold out to François Pinault’s PPR (now Kering) for $2.92 billion. Arnault took the case to court but lost.

Arnault tried to break the duopoly of Christie’s (owned by François Pinault) and Sotheby’s by buying British art auction house Phillips in 1999, making a failed bid for Sotheby’s then buying French house Tajan in 2001. But he backed out of the battle within a couple of years. The game is not completely over, however: in 2015 he invested in German online auction site Auctionata.

Arnault invested heavily in the dot-com boom. Having bought into MP3.com and eBay, he set up European internet fund Europ@web with $91 million (£73.4m) of his own money. However, in 2000, as he was about to float it for $3.3 billion (£2.7bn), one of his major gambles, e-tailer Boo.com, went into liquidation. Europ@web was quietly shelved. It wasn’t all bad: Arnault invested in Netflix in 1999, when it was still a DVD rental firm.

With the Arnault family all keen skiers, in 2006 LVMH opened the Cheval Blanc ski resort in Courchevel, with a two-star Michelin restaurant in 1947. The hotel group now has resorts in the French West Indies, Maldives, St Tropez and, as of next year, Paris.

Every billionaire seems to have a mega-yacht – but why buy just one when you can snap up a whole yacht company? LVMH bought Princess Yachts in 2008 for around $257 million (£207m), as well as shipyard Royal Van Lent, which built Arnault’s 101-metre mega-yacht Symphony, thought to be worth $152 million (£122.6m).

Bernard Arnault, KBE
In 2012 Belgium revealed that Arnault had applied for dual citizenship, as Paris looked to impose a now-defunct 75% tax on incomes over $1.13 million (£910k). He denied doing it for tax reasons and withdrew the application a year later as "a gesture of my attachment to France and my faith in its future” and said all French people should “do their bit” for the country.

Arnault was made an honorary Grand Officer of the French Legion of Honour in 2011 and a KBE – Knight Commander of the Most Excellent Order of the British Empire – in 2013 for "services to business and the wider community", thanks to LVMH’s ownership of British brands such as Thomas Pink and Glenmorangie whisky.

Arnault took designer John Galliano under his wing, making him the first Briton to head a French haute couture house at Givenchy and then Dior – he even made daughter Delphine’s wedding dress. But after making anti-Semitic comments in a bar, Galliano was sacked in 2011 and convicted of making public insults. He sued the house of Dior and Galliano for wrongful dismissal; in 2014, a French labour court ruled against him, although he was only made to pay a nominal $1.13 (91p).

Arnault launched the LVMH Prize for Young Fashion Designers, the brainchild of daughter Delphine, in 2013. It has had over 5,000 applicants, all of whom must have released at least two collections and who vie for a prize of a $341,000 (£275k) grant and mentorship from LVMH. Last year LVMH also launched an accelerator program for 50 international start-up businesses, La Maison Des Startups. Innovation, Arnault said in a statement, was an “integral part” of his companies, some of which are centuries old.

In 2014, LVMH sponsored the $135 million (£109m) Fondation Louis Vuitton in Paris, designed by super-architect Frank Gehry and comprising 12 glass sails to look like a “transparent cloud”.

In 2014 Arnault agreed to relinquish his 23% stake in Hermès, and not buy any shares in the luxury rival for five years. It ended an acrimonious four-year attempt to buy out control of the scarf-maker, with lawsuits filed by both sides amidst accusations of insider trading, blackmail, and unfair competition.

In late 2018, LVMH announced that it had acquired luxury hotel, train, and river cruise company Belmond for $3.2 billion (£2.6bn). Belmond, formerly known as Orient-Express, was established more than 40 years ago with the acquisition of Hotel Cipriani in Venice and has a portfolio of 46 hotels, restaurants, rail, and river cruise experiences.

Arnault married Anne Dewavrin in 1973, but the couple separated after 13 years. They had two children, Delphine and Antoine. He now lives in Paris’ Left Bank with second wife Hélène Mercier (pictured), a French-Canadian concert pianist he married in 1990 and with whom he has three sons: Alexandre, Frédéric, and Jean. Arnault is also an amateur classical pianist.

Four of Arnault’s five children have been ushered into LVMH. Antoine, 41, is chairman of Loro Piana and chief executive of Berluti. Delphine, 43, is a director and executive vice president at Louis Vuitton (and widely expected to succeed her father). Alexandre, 26, is president and chief executive of Rimowa; and Frédéric, 23, became the strategy and digital director at TAG Heuer in 2018.

Arnault (pictured with former French president François Hollande and Frank Gehry in front of an oil painting by Gerhard Richter in the museum) is a serious art collector, with a trove of thousands of modern and contemporary works including pieces by Damien Hirst, Andy Warhol, and Pablo Picasso. He says the first piece he collected, in the early Eighties, was a Monet.

Demonstrating Arnault’s philanthropic side, LMVH has pledged $224 million (£180.6m) to a fund to restore Paris’s Notre Dame Cathedral after a devastating fire ripped through the 850-year-old church in April 2019. LMVH called its donation a show of "solidarity with this national tragedy".

An unlikely pairing, but Apple’s Steve Jobs reached out to Arnault when he was thinking about opening Apple stores. Arnault says Jobs told him, “You know, Bernard, I don’t know if in 50 years’ time my iPhone will still be a success but I can tell you, I’m sure everybody will drink your Dom Pérignon.”

While Steve Jobs may have been a big fan of Arnault’s work, Arnault has shown his own adulation for Swiss tennis star Roger Federer. At a Möet Chandon party (Federer is an ambassador) Arnault called him a “living god”. Arnault has even played doubles with his idol, against his sons.

It goes without saying that LVMH, arguably the world’s biggest luxury goods business, is a huge success.

It comprises 70 companies, from Veuve Clicquot and Dom Pérignon to TAG Heuer and Bulgari – and even Rihanna’s Fenty Beauty line. Arnault says he was heavily criticized for putting so many brands into one group but that every competitor now tries to imitate the model, “which is very rewarding for us”.

According to Forbes, his total net worth is now $153.2B and, with Gates donating a large chunk of his fortune to the Bill & Melinda Gates Foundation, the fashion pioneer looks set to stay there.

Bernard had the perfect blend of all the qualities that an ideal businessman should possess...he was calm, yet extremely clever and wise in his ways. While giving his designers complete freedom, he met the requirements of his customers.

Although his son and daughter take care of most of the luxury brands that he owns as of today, he still is a hands-on entrepreneur who takes care of every single product that comes out of his fashion houses. When we take a look at one of those gorgeous Louis Vuitton bags, we know that is the perfection right there.