Would you be willing to gamble all your money like Smith did? 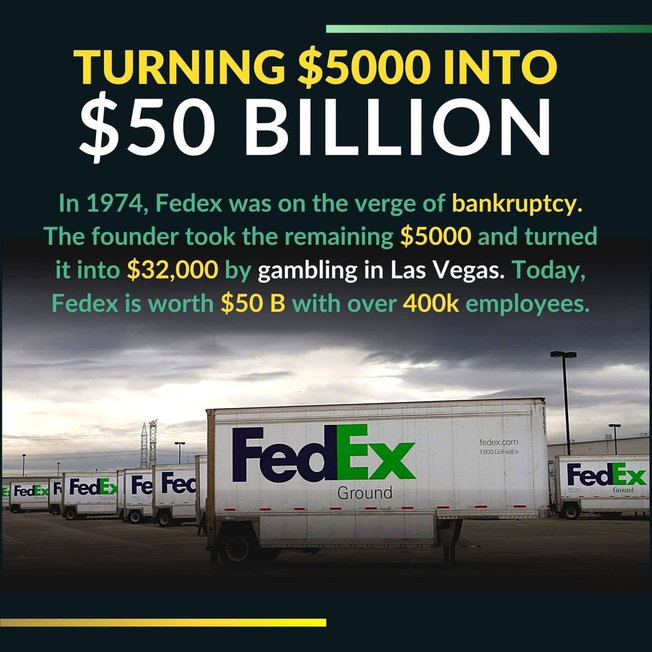 That sounds like a part of a fiction book. Google it if you don't believe but the founder of FedEx once saved the company by taking it's last $5,000 and turning it into $32,000 by gambling in Las Vegas.

The man is Frederick W. Smith who is the founder and current CEO of FedEx. In 1971, Smith took his personal fortune of around $4 million and raised around an additional $90 million to found a delivery company structured such that it could potentially deliver packages overnight to anywhere in the world.

Unfortunately, three years after the company began, thanks largely to rapidly rising fuel costs, Federal Express was on the verge of bankruptcy, losing over $1 million a month, with no one willing to give them any additional loans nor any investors interested in contributing capital.
Instead of taking a flight home to Memphis, Smith took the $5000 and flew to Las Vegas and played Black Jack that weekend with the remaining company funds. By Monday, to the shock of other higher-ups in the company, FedEx had $32,000 in its bank account, which was just enough to cover the fuel for their planes and to continue operating a few days more. When asked what he’d been thinking taking a chance like that with company funds, he stated: “What difference does it make? Without the funds for the fuel companies, we couldn’t have flown anyway.”