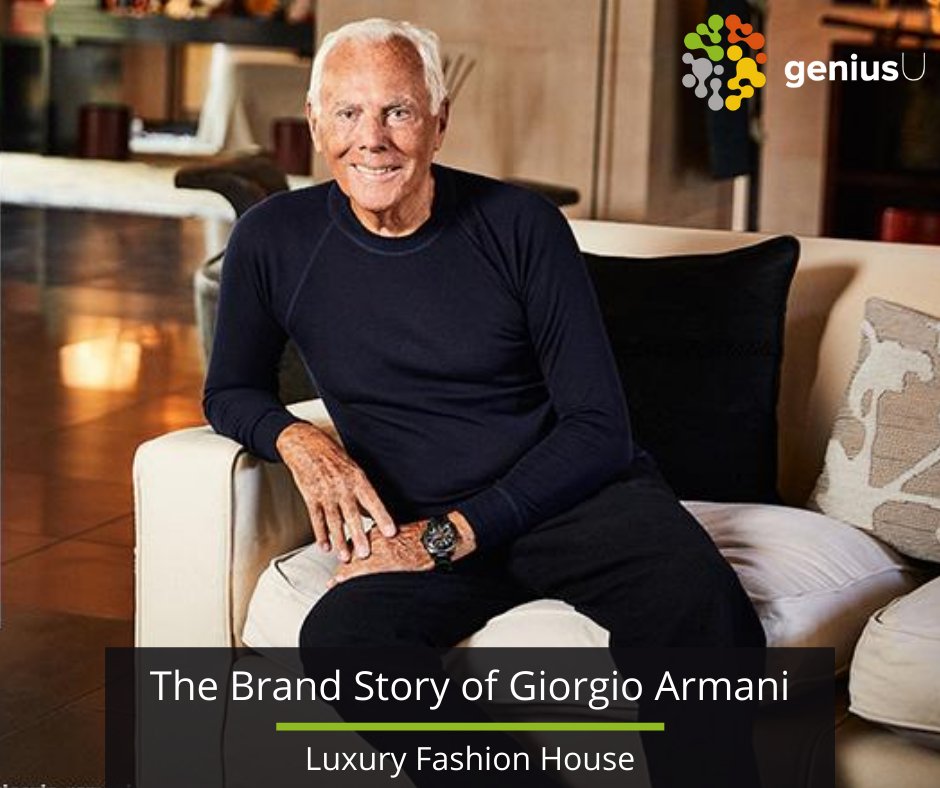 “Remember that in the end the customer doesn’t know or care if you are small or large as an organization – she or he only focuses on the garment hanging on the rail in the store.” -Giorgio Armani

Luxury brands, especially those named after the founder like Gucci, Chanel, Christian Dior or Versace, generally reflect their design qualities and values. Their foundation is in the personalities of these creators. This gives these brands a special identity of their own. As designs are the most important element in the fashion and luxury world, individual qualities are important in giving the brand its unique identity and sustaining the brand. Similarly, for Giorgio Armani, the classic, simple and clean style went beyond just fashion and helped enhance the aura of the person who wore it. Armani described his perspective on fashion by saying,

“I was the first to soften the image of men, and harden the image of women. I dressed men in women’s fabrics, and stole from men what women wanted and needed—the power suit.”

The man behind the brand, the creator, Giorgio Armani was born on July 11, 1934, in Piacenza, Italy. A son of a shipping manager, Armani had two siblings. He and his siblings faced the hardships of World War 2. He always took a keen interest in human anatomy and hence pursued medicine. But soon he left his medical studies to serve the army. While in service he received 20 days’ vacation in Milan and this is where his career in fashion began. Working as a window dresser until 1964, when he was taken by Nino Cerruti as a fashion designer for menswear at Hitman.

Around the 1960's he met Sergio Galeotti and this laid the foundation for a life long partnership. It was Galeotti who encouraged Armani to start freelancing for other designers as well. After years of experience, they together started Armani S.p.A in July 1975. The same year they launched their first-ever menswear collection, followed by a womenswear collection the following year. Their debut was well-received critically. His philosophy was simple:

He said, “To create something exceptional, your mindset must be relentlessly focused on the smallest detail”- just like a true luxury brand.

Giorgio’s fame went through the roof when the Richard Gere hit American Gigolo released in 1980. The lead featured a closet full of classic tailored Armani suits. His ‘power suits’ made frequent appearances in the television series Miami Vice. This created a great demand for these suits amongst many professionals.

Together, Galeotti and Armani earned much fame and many awards. In 1985, Armani faced the personal loss of his friend and business partner to a heart attack. Galeotti suffered from leukemia. While many questions arose regarding how the designer would manage the continuation of the empire, Armani came out victorious and quelled any doubts by expanding his business to the next level. Under the parent umbrella brand of Giorgio Armani, he launched a series of sub-brands to cater to different market segments and their needs. Its product lines covered all corners of fashion; whether luxury fashion, affordable fashion, swimwear and underwear, accessories and jewelry, perfumes and cosmetics, eyewear, bags, and shoes for men, women, and children! Besides fashion, he even ventured into other industries like home decoration, confectionery, floral arrangements, restaurants, hotels, and residential properties!

Giorgio Armani has garnered the respect of millions of people and has attracted celebrities like David and Victoria Beckham, Cristiano Ronaldo, Rafael Nadal, Megan Fox, and Rihanna to be the face of the brand.

Giorgio Armani created huge popularity amongst the elite of the luxury fashion world. He then started utilizing his brand name ‘Armani’ to come up with so many verticals and venture into other industries.

Emporio Armani: This brand was created for working professionals between 25-35 years old. Giorgio Arman, mainly only designed for two brands - the signature Giorgio Armani brand and Emporio Armani. He created classic and crisp designs for this target segment.

Giorgio Armani Prive: Developed in 2005, this was Armani’s couture line designed for the red carpet looks for celebrities. The line offers Giorgio Armani Prive dresses and gowns for a gala or balls that are flouncy, luxurious, and classy.

Armani Collezioni: This brand is positioned slightly lower in price than the signature brand. With approx 20% lower prices, Collezioni caters to people who love to wear high-quality premium luxury apparel but are often priced-out. Hence, Collezioni provides an excellent line for affordable fashion.
EA7: The footballer, Andriy Shevchenko, and his number 7 shirt were the inspiration for this line. The collection included mainly sporty apparel as well as athletic shoes.

Armani Jeans: This brand was the least expensive brand and was aimed at the 18-30-year-olds audience who wanted something street-styled and casual wear for themselves.

“The philosophy underpinning my brand has always been sustainability: through my work, I offer clothes that last and can be worn for many years. The question of ethics even comes before strategy.” – Giorgio Armani

Giorgio Armani has been a part of various social responsibility events. In 2016/17 Giorgio Armani made an agreement with the Fur Free Alliance and removed all products that were made of animal fur. The company also signed the Fashion Pact in 2019 which aimed to reduce greenhouse gas emissions, stop global warming, and restore biodiversity. Giorgio Armani has also made efforts to help Italy during the COVID-19 crisis. They started manufacturing single-use medical overalls and also made a total donation of 2 million euros to various hospitals in Rome, Milan, Piacenza, and Bergamo.

For over 3 decades Giorgio Armani has been managing and designing luxury apparel, yet the brand stays true to the values it established in 1975. Giorgio Armani has stood the test of time as a luxury fashion brand by having a clear vision and philosophy. His unique designs hold a special place in the hearts of his fans. Even after reaching the heights of success he remains true to his roots and operates in Milan and has an abundance of love and respect for the city. This is also clear from the brand's Instagram strategy.

Giorgio Armani has seen the worst times of a world war and also terrorism in the ’70s at Milan. While there were demonstrations outside his studio in Corso Venezia, he would be in his room sketching and imagining a new society that would dawn and interpret the future. Having been through a rollercoaster of life, he managed to bring his brand to a level that is untouched and unexplored by many other luxury brands.