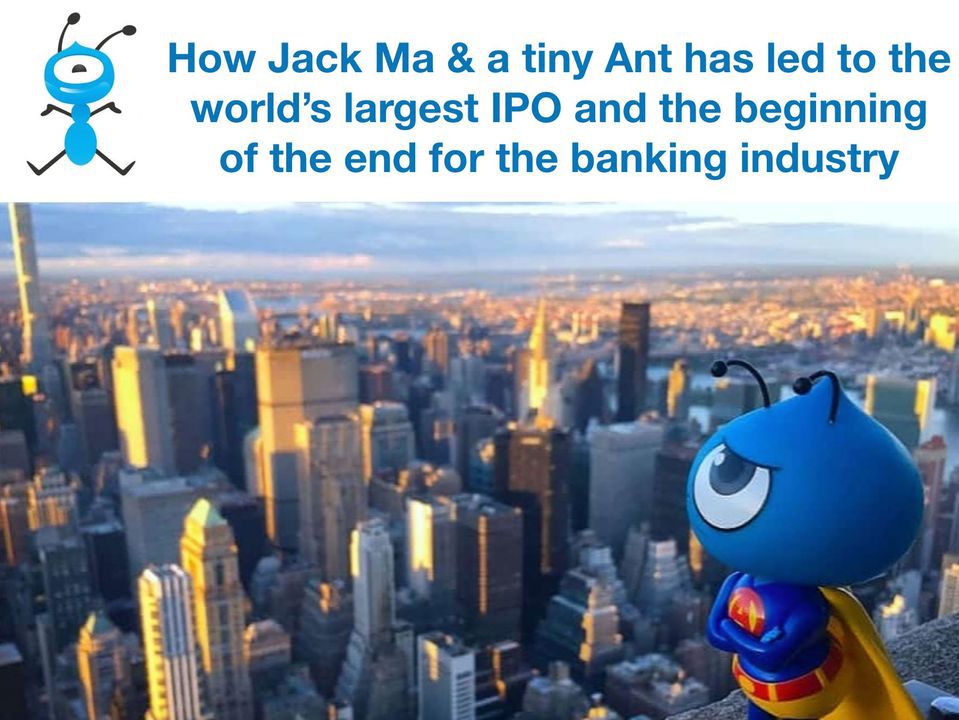 Jack Ma has made headlines today for raising more than $34 billion in the World’s largest IPO in history for his company, Ant Group - which was only launched 6 years ago.

Trading starts next week on the Shanghai and Hong Kong Stock Exchanges, at a value of over $300 billion. What has made Ant Financial such a big deal, and why does this mark the end of big banks and the finance industry as we know it?

Traditional banks are set up as an expensive middle man, where banks charge us to store our money, give us less interest than our savings lose in inflation, and then loan the same money back to us at much higher interest, while also using that money to invest and keep all the profits.

Ant doesn’t work like a traditional bank. It’s an 'Amazon for money' that makes it easier - not more difficult - for us to earn, exchange and invest our money at a fraction of the cost, in a fraction of the time.

That’s how Ant has become the world’s highest-valued fintech company and the world’s largest digital payments platform with over one billion users and 80 million merchants today.

Beginning as Alipay in 2004 as a Chinese version of PayPal, Jack Ma connected his payment platform with over 200 Chinese Banks by 2010. While PayPal has stayed as a payment platform, Jack had other ideas, giving users multiple ways to make money with their money:

Zhima Credit, Ants’ credit score system, gives users a way to get financing, lending, buy a house or car immediately based on their payment record, with over 10 million users getting credit even if other banks have given them a poor credit score.

MYbank, Ants’ online bank, can approve a loan in minutes. It has already given out over 20 million loans to companies that otherwise could not easily get them.

Ant Fortune, Ant’s investment supermarket, gives financial institutions a place to reach all Ant users and to educate and serve them with their investment products.

Xiang Hu Bao, Ant’s mutual protection plan, gives users a way to secure their own insurance by all paying in to a central fund that then pays out in the case of critical illness. Again, with no extra fees are charged to those who take part. Over 50 million signed up in the first six month.

In 2014, Jack turned Alipay into Ant Group with a vision of turning Ant into the Amazon of money. And that is what it has become.

While traditional banks give a poor customer experience and make it difficult to set up a new account, to make an international transfer or choose the right investments, Ant works like Amazon, where the customer experience is the main focus, at the fastest speed and the lowest price.

This is summed up in Ant’s “three-one-zero” process - three minutes to apply, one second to get a credit decision, and zero people involved in the decision.

As Bill Gates says, “The world needs banking but it does not need banks.”

Banking is one industry that will be massively disrupted in the coming digital decade. Other industries ready for disruption include education, healthcare, energy, automotive, transportation, every industry still relying on middlemen, and government itself.

Which wave are you riding?