Michelle Obama is a lawyer, writer, and wife of former U.S. President Barack Obama. Prior to her role as the first lady, she was a lawyer, Chicago city administrator, and community-outreach worker. 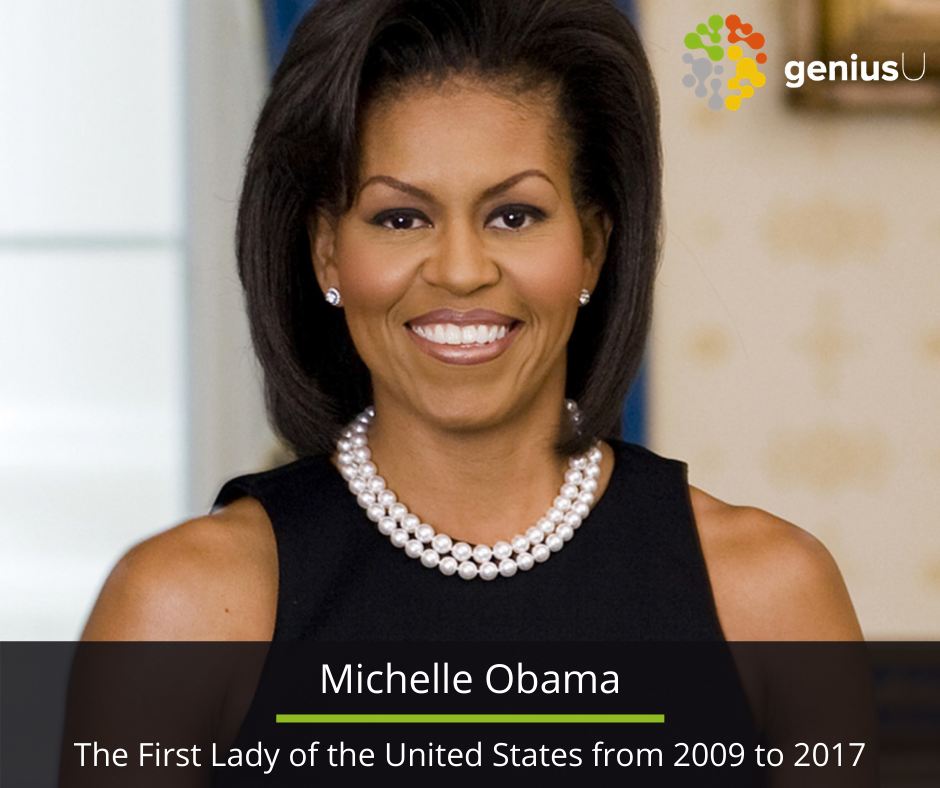 Michelle Obama is a lawyer and writer who was the first lady of the United States from 2009 to 2017. She is the wife of the 44th U.S. president, Barack Obama. As the first lady, Michelle focused her attention on social issues such as poverty, healthy living, and education. Her 2018 memoir, Becoming, discusses the experiences that shaped her, from her childhood in Chicago to her years living in the White House.

Michelle was born Michelle LaVaughn Robinson on January 17, 1964, in Chicago, Illinois. Michelle's father, Fraser Robinson, was a city-pump operator and a Democratic precinct captain. Her mother, Marian, was a secretary at Spiegel's but later stayed home to raise Michelle and her older brother, Craig. At just 21 months apart in age, Craig and Michelle were often mistaken for twins.

The Robinson family lived in a small bungalow on Chicago's South Side. Michelle and Craig shared quarters, sleeping in the living room with a sheet serving as a makeshift room divider. They were a close-knit family, typically sharing meals, reading, and playing games together.

Raised with an emphasis on education, both Michelle and her brother learned to read at home by age four. Both skipped the second grade. By the sixth grade, Michelle was taking classes in her school's gifted program, where she learned French and completed accelerated courses in biology.

Michelle went on to attend Whitney M. Young Magnet High School, the city's first magnet high school for gifted children, where, among other activities, she served as the student government treasurer. In 1981, she graduated from the school as class salutatorian.

Michelle and Barack married at Trinity United Church of Christ on October 3, 1992. They met in 1989, at Michelle's first job as a lawyer at the Chicago firm Sidley Austin. Her future husband, Barack, was a summer intern to whom Michelle was assigned as an adviser.

Initially, Michelle refused to date Barack, believing that their work relationship would make the romance improper. She eventually relented, however, and the couple soon fell in love. After two years of dating, Barack proposed.

After graduating from law school in 1988, Michelle worked as an associate in the Chicago branch of the firm Sidley Austin in the area of marketing and intellectual property.

In 1991, she left corporate law to pursue a career in public service, working as an assistant to Mayor Richard Daley and then as the assistant commissioner of planning and development for the City of Chicago.

In 1993, Michelle became executive director for the Chicago office of Public Allies, a nonprofit leadership-training program that helped young adults develop skills for future careers in the public sector.

In May 2005, Michelle was appointed vice president for community and external affairs at the University of Chicago Medical Center, where she continued to work part-time until shortly before her husband's inauguration as president. She also served as a board member for the prestigious Chicago Council on Global Affairs.

After her husband's political role pushed her family into the spotlight, Michelle was publicly recognized for her no-nonsense campaign style as well as her sense of fashion.

In May 2006, she was featured in Essence magazine as one of "25 of the World's Most Inspiring Women." In September 2007, Michelle was included in 02138 magazines as number 58 in "The Harvard 100," a yearly list of the school's most influential alumni.

During the inauguration ceremony for her husband's second term, on January 21, 2013, Michelle and her daughters received attention for their fashion choices, which included clothes from Thom Browne, J. Crew, and Kate Spade. Michelle also drew praise for the red Jason Wu dress she wore during the subsequent events.

In May 2018, Michelle and Barack announced that they signed a multi-year deal to produce series and films for Netflix through their company, Higher Ground Productions. “Barack and I have always believed in the power of storytelling to inspire us, to make us think differently about the world around us,” the former first lady said in a statement.

Their first joint effort resulted in Netflix's August 2019 release of American Factory, a documentary about the 2015 launch of a Chinese-owned automotive glass factory in Dayton, Ohio, and the clash of different cultures and business interests. A hit with critics, American Factory earned an Academy Award for the best documentary feature in February 2020.

That May, Michelle became the centerpiece of another Netflix documentary, Becoming, which follows her on tour as she promotes her memoir of the same name.

As the world grappled with the coronavirus in 2020, Michelle appeared alongside Laura Bush on Lady Gaga's One World: Together at a Home benefit concert in April to thank health care workers and offer a message of hope. Shortly afterward, she teamed with PBS and Penguin Random House to launch her live-streamed Mondays with Michelle Obama series, which features the former first lady reading some of her favorite children's books.