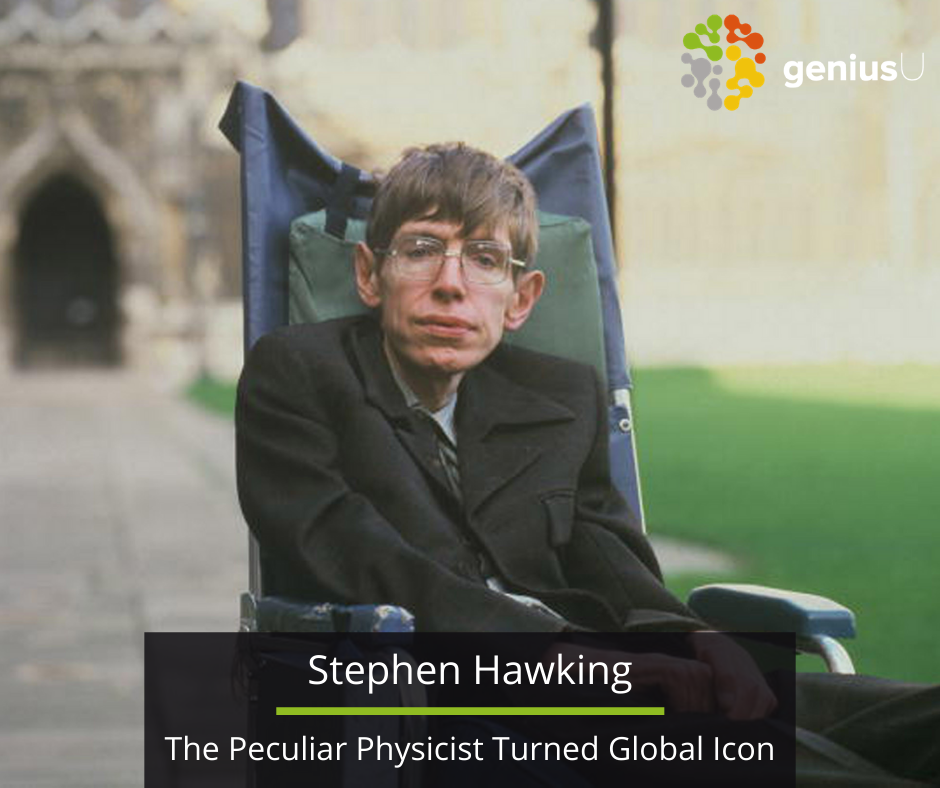 Even though he could only communicate using a muscle in his cheek, Stephen Hawking made himself into a world-renowned physicist thanks to his groundbreaking work, impish wit, and refusal to let his disability stifle his potential.

Stephen Hawking was an undeniably fascinating figure. Whether you’re an admirer of his exceptional work, a fan of his appearances in popular TV shows, or amused by his habit of mowing people down in his wheelchair – there was much more to this Cosmologist than met the eye.

Stephen William Hawking was born on January 8th in 1942, in Oxford, England. His arrival was in the midst of WWII and a financial rough patch for his well-educated parents. But Stephen took great pride in knowing that he was born on the 300th anniversary of the death of Galileo Galilei.

His subtle peculiarities can be traced back to his family, who were often described as an “eccentric” bunch. Their family car was an old London taxi, they housed bees in the basement, and produced fireworks in the greenhouse. At dinner, each Hawking would intently read a book while the family ate in complete silence.

Stephen’s father was a researcher in tropical medicine and tried to nudge his son into studying medicine too. But Stephen’s fascination was for the stars and beyond. He often lay in the backyard along with his mother and siblings, staring up at the stars during warm summer evenings. It was here that young Stephen began to question why the universe is how it is, and why it exists at all.

His mother noted his budding passion for the skies, “Stephen always had a strong sense of wonder,” she remembered fondly.

Down to more earthly interests, Stephen Hawking had a proclivity for playing and inventing board games. He also showed an interest in how things worked. At home, in his family’s three-story fixer-upper house which never really got fixed, he curiously disassembled clocks and radios. Although, he was rarely successful at putting them back together again.

In 1950, Stephen attended St. Albans School in Hertfordshire, where his sharp mind won him the nickname of “Einstein” amongst his peers. Although his grades were ranked among the worst in his class and his untidy classwork was the despair of his teachers.

Stephen’s favorite subject by far was math. His teacher inspired him and a group of fellow intellectuals to build a computer out of recycled parts for solving basic mathematical equations. This interest in math later motivated him to pass a scholarship exam, earning him a spot at his father’s old college – Oxford. The scholarship was greatly appreciated by his parents, who didn’t have the money to send him without one.

A degree in Mathematics was his first choice, but this wasn’t offered at Oxford. So he settled for a degree in what they did offer: Physics.

At 17, he began his first year at this prestigious college. It was quite boring for Stephen’s proficient mind. He found the work “ridiculously easy” and could do it without peering over at his classmates or asking tutors for help. He quickly found himself feeling isolated and lonely.

But during his second and third year, his personality met a turning point. Stephen joined the college rowing club which encouraged him to cultivate a witty, lively, and popular image. He wasn’t very fit, so he was left in charge of steering the boat. But he soon became the most daring member of the club – steering his team into risky courses which often resulted in damaged boats.

In less devilish ventures, Stephen also developed an interest in classical music, science fiction, and investigating the complexities of the universe. His pursuit of these new hobbies barely left him at any time for actual studying. At most, he averaged about an hour a day focusing on school.

These unimpressive studying habits led to anxiety and sleepless nights before his final examination. If he was to attend the University of Cambridge to study Cosmology, he needed to pass his degree with first honors. Which he did, in 1962.

In 1963, Stephen’s postgraduate studies began at Cambridge – but so did the first signs of his disease. During his last year at Oxford, he had noticed a few unfamiliar difficulties while rowing. Sometimes he would trip for no apparent reason or slur his speech unexpectedly. But Stephen decided to keep these symptoms to himself.

One afternoon, while walking down the stairs at his University, he lost his balance and tumbled down the steps, hitting his head. Although shaken by the event, he chalked his embarrassing fall to a momentary distraction and thought nothing more of it.

However, it didn’t take long for his symptoms to worsen. His speech became noticeably slurred and he was becoming much ‘clumsier’ than usual. It was only when he returned home for Christmas that his family caught on to his symptoms. They promptly sent him to the doctor, where Stephen was tediously examined for two long weeks.

Just after his 21st birthday, Stephen Hawking was given the devastating news that he had ALS (Amyotrophic Lateral Sclerosis). A neurodegenerative disease where sufferers progressively lose control over their voluntary muscles. His doctor gave him two years to live.

Stephen Hawking now spent his days in his hospital bed, among the beeps of machines and the occasional bustle of passing nurses. He lay there thinking about his studies, his hobbies, and the intriguing girl he met at the New Years' party. It all seemed so pointless now. Why bother doing anything when he was just going to die within two years?

He turned to look at the patient in the bed next to him, seeking a distraction. The patient in the bed nearby was a young boy suffering from Leukemia. Gradually, the boy’s saddening state pushed Stephen to see his own diagnosis in a different light. Maybe earning his Ph.D. and marrying that girl wouldn’t be so pointless after all. In fact, there were many things he wanted to do with his life – before it was all over.

In 1985, he suffered a life-threatening bout of Pneumonia and required a tracheotomy – which removed the last remnants of his speech. Stephen Hawking’s ability to work was in great peril, and he now required around-the-clock care. A handful of nurses and a select few of his graduate students rose up to the occasion.

The following year, his dire case of speech impediment was helped by a voice synthesizer. This device allowed him to select words on a screen that would then be read out by a computer. Being Stephen, he frequently put his new toy to use by telling groan-worthy “science jokes”. At the end of one particular interview, he asked an unsuspecting crewman “What is a black hole?” After a dramatic pause, he quipped “Something you find in a black sock.”

When he first received the device, he used his eyes to control his writing, but during the last decade of his life, he could only move a muscle in his right cheek to spell out his words. It took him a full minute to write one word and ten minutes per sentence. It was a long exercise of patience, inducing much frustration and sometimes loneliness as some people grew impatient and would simply leave him.

But this setback in his writing didn’t stop Stephen Hawking from documenting his astounding research. In 1988, he became a sort of “physics rockstar” with his controversial book A Brief History of Time: From the Big Bang to Black Holes. To his surprise, this complex book on Cosmology sold over a million copies – becoming the best-selling nonfiction book. Even more surprisingly, it maintained this position for over a year.

Despite his condition, Stephen Hawking wrote and published over 15 books which remain hugely popular today. Their lasting impact on the fields of modern astronomy and theoretical physics made him one of the most distinguished thinkers of our time. Moreover, his efforts in making this knowledge widely accessible to the non-scientific community also made him into the best-known living physicist in the world.

His confinement to a wheelchair did nothing to subdue his adventurous spirit. Stephen traveled the world, was submerged in a submarine, and even suspended in a zero-gravity flight. He lent his voice and personality to popular TV series such as The Simpsons, The Big Bang, and Star Trek. His wit and child-like humor stole the spotlight in interviews with the likes of Conan O’Brien and John Oliver. He hosted and narrated Genius, a series on tackling historically scientific questions. Stephen even saw his marriage and career unfold before his eyes during the Oscar-winning portrayal of his life The Theory of Everything.

At 76 years old, Stephen had long exceeded his goals and life expectancy. But on the morning of March 14th, 2018, the brilliant human being that was Stephen Hawking passed away peacefully at his home in Cambridge. Curiously enough, just as his birth was on the deathday of Galileo, Stephen’s own death coincided with the birthday of Albert Einstein. A fact that Stephen himself surely found amusing.

Although we have lost one of the most fascinating minds on earth, Stephen Hawking has left an insurmountable legacy. His far-reaching influence, teachings, and inspiration to others have and will continue to make waves in both academic and social spaces. He demonstrated that his disease was merely a test of patience and adaptability – not an obstacle. He proved over and over that no matter how bad life gets, success is always possible through determination, focus, and a little humor.

“Be curious, and however difficult life may seem, there is always something you can do, and succeed at. What matters is that you don’t just give up.” – Stephen Hawking