Lady Gaga’s Life Story: The Outcast Who Rose to Become The Queen Of Pop 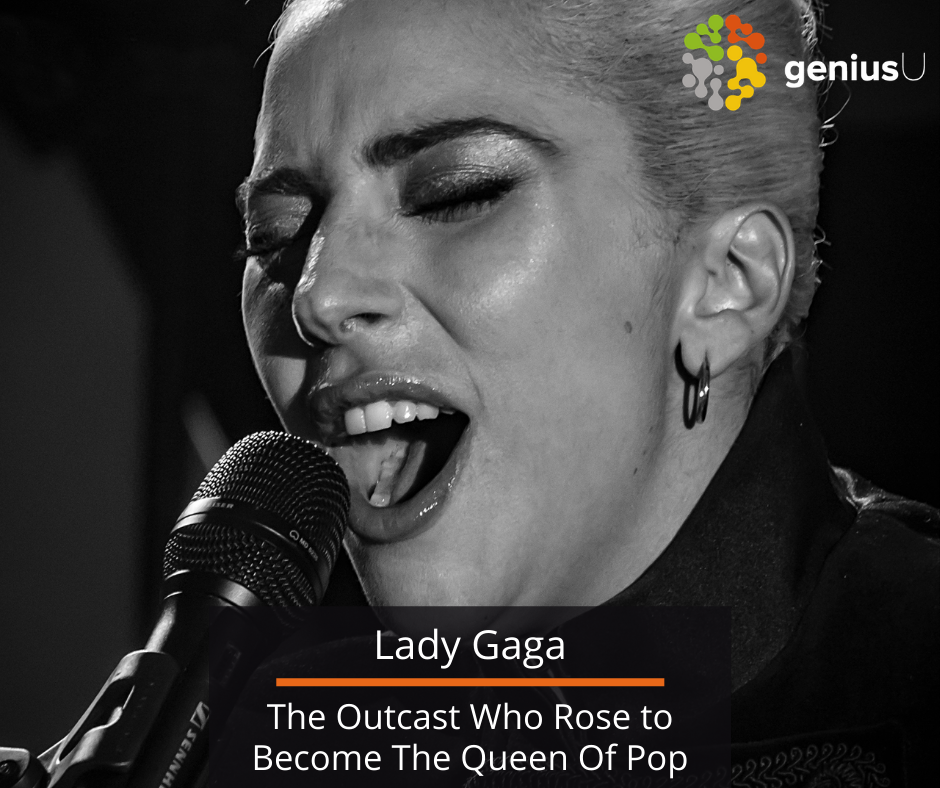 Lady Gaga has been disrupting the music and fashion scenes since she first stepped into the spotlight. From her outrageous attires to her flamboyant live performances and powerful activism, she is one of the world’s most successful contemporary artists.

While her songs have often been marked as wildly controversial, there is a sense of vulnerability in her latest albums where she reveals a softer, more emotional side of herself.

This artistic revelation is deeply rooted in her lifelong struggle with depression, insecurity, and her journey of overcoming trauma. However, her songs only scratch the surface of this surreal pop icon. This is her story.

Growing up in a middle-class duplex, Stefani was quickly recognized as a creative child with a unique personality. At four years old, her mother introduced her to the piano so she could become a “cultured young woman.” Stefani felt like she was meant to play the piano, easily creating music by ear. At 11, she began taking weekend acting classes, opening up her imagination to a future career as an actress.

Stefani attended a private, girls-only Catholic school where she was a notedly diligent student. But her social life wasn’t quite as accomplished. Her unusual quirks and interests made her different from her peers, and the other children started bullying her over trivial things like her “big nose” and “rabbit teeth.”

Young Stefani became insecure, anxious, depressed, and knew far too well how it felt to be humiliated and isolated. She escaped into the musical world where her artistic oddities were welcomed. She learned how to sing and intently studied her father’s classic rock albums. Music was everything to Stefani.

During high school, Stefani immersed herself in acting and songwriting. She won every lead in the school plays, earning jealous taunts from the popular girls who called her “the Germ” and “dirty.” Regardless, Stefani remained kind to everyone and was known for her random acts of kindness.

Thanks to her father’s albums, her interest in classic rock grew, drawing creative inspiration from Queen and Elton John. She soon formed a band and they jammed out to covers of Pink Floyd and Led Zeppelin at open-mic nights.

After graduating, at age 17, she enrolled in the Collaborative Arts Project 21 — a music school at NYU’s Tisch School of the Arts. She worked as a waitress and at downtown cabaret clubs as a singer and pianist. Everything seemed to be going smoothly, but at age 19, Stefani was raped by a man 20 years older than her. For seven long years, she didn’t tell a soul and often blamed herself for the sexual assault.

By the second semester of her sophomore year, she dropped out to focus on healing herself through her music. She found the cheapest apartment in NY, using a futon as a couch, and dreamt about getting a record deal by the time she was 21.

Without college to worry about, Stefani took on three jobs to make ends meet, including a stint as a go-go dancer. She auditioned for shows all over New York in a desperate attempt to fulfill her childhood dream of becoming an actress. Performing on stage was the only time Stefani truly felt alive.

In 2001, she finally won a small role as a high-school student in an episode of The Sopranos, although it wasn’t very memorable. She got back into singing and formed a band called the Stefani Germanotta Band with some NYU friends, recording ballads underneath a liquor store. After one particular performance, Stefani was approached by talent scout Wendy Starland, who told her, “I’m about to change your life!” They rushed out of the club and Wendy called up music producer Rob Fusari.

Stefani soon met the producer in his New Jersey studio for an audition. Rob wasn’t impressed by Stefani’s physique and had low hopes for her musical abilities — until she sang while playing the piano. He was in awe and called her a “female John Lennon” with the “oddest talent.”

From then on, Stefani traveled daily to New Jersey to work with him, composing electro-pop tracks to send out to industry executives. Fusari pushed her to dress and act like a “sexy dance star,” and renamed her “Lady Gaga” — courtesy of Queen’s song “Radio Ga Ga.”

At 20 years old, Lady Gaga was invited to join Island Def Jam after the record label liked one of the tracks sent by Fusari. They signed her on, but they wanted a puppet, not an artist. They tried to mold her into a mainstream pop star. Whatever they told her to do, Gaga would do the opposite to feel like she was still in control. Exasperated, the label dropped her after just three months.

Depression set in. She couldn’t even talk to Fusari because she was crying so hard. But she also had a revelation: A record deal doesn’t make an artist, she could make herself an artist. So she set out again, singing at burlesque rock shows and experimenting with fashion to find her own style. She sang at the Lollapalooza music festival with performance artist Lady Starlight, who helped Gaga define her onstage persona.

At 21 years old, Fusari introduced her to producer RedOne, who later signed her to Streamline Records. Gaga was worried they wouldn’t think she was “pretty enough” to become a performer.

The record label hired her to write songs for Britney Spears, Fergie, and the Pussycat Dolls. Gaga began dieting with pills and eating one meal a day to lose weight. The label asked her to dye her hair blonde to look “more like a pop star.” Once again, she had fallen into the trap of pleasing her label over herself.

“Sometimes in life, you don’t always feel like a winner, but that doesn’t mean you’re not a winner.”— Lady Gaga

After being told by her boyfriend that she wasn’t going to make it, Gaga moved to L.A. and bought books on Andy Warhol to help her make sense of her own journey. The books became her bible and freed her to reinvent herself. She began writing dance songs and wearing space-age disco outfits. She drew inspiration from Madonna, Cher, and drag queens.

Famous R&B artist Akon heard one of her new party tracks and insisted she sign on with his own label. She spent all of 2007 recording her debut album, The Fame. When it released the following year, it shot to number one in eight countries. The single “Poker Face” later became the world’s best-selling single of 2009. Lady Gaga had finally made it.

She began touring and performing on increasingly bigger stages. She was receiving acting roles and collaborating with other song artists. Album after album, Gaga reached number one and became the “most downloaded female act in a year” in the U.S.

The people who had dismissed her before were now pleading for free passes to her shows. She changed her number and cut them off, staying close only to her family and her creative team called Haus of Gaga — a concept inspired by Andy Warhol’s Factory.

In 2012, Gaga suffered a gruesome hip injury during her Born This Way tour. She was forced to drop out of the spotlight for six months. During that time, she reflected on her life and got to work on a new album, ARTPOP, where she aimed to make sense of the chaos in her past.

The album marked the birth of a whole new Lady Gaga. It set an artistic and individual tone that was passionate, colorful, emotional, and theatrical. She opened herself up to her fans and the world on controversial subjects like addiction, feminism, and sexuality — channeling her past traumas with powerful vocals. She also spoke up about her battle with depression and a chronic pain condition called fibromyalgia.

Gaga gave an even deeper look into her personal and family life during her own Netflix documentary. She has become a strong advocate for LGBT youth, survivors of sexual assault, and sufferers of chronic illnesses. She eventually created her own charity for mental health support, appropriately called the Born This Way Foundation.

After years of struggling with her identity and going through a great deal to find her true creative and artistic self, Lady Gaga is finally the person she had always wanted to become. She now uses her unconventional music to deliver wholehearted messages, inviting you to hold your struggles close to your heart and be proud of who you are, to fight for what you truly believe in and not let others influence you, and to find the courage to access the parts of yourself that are truly great.

“Fight and push harder for what you believe in, you’d be surprised, you are much stronger than you think.”— Lady Gaga