What is that one thing that drives your spirit to grow, to excel in life? 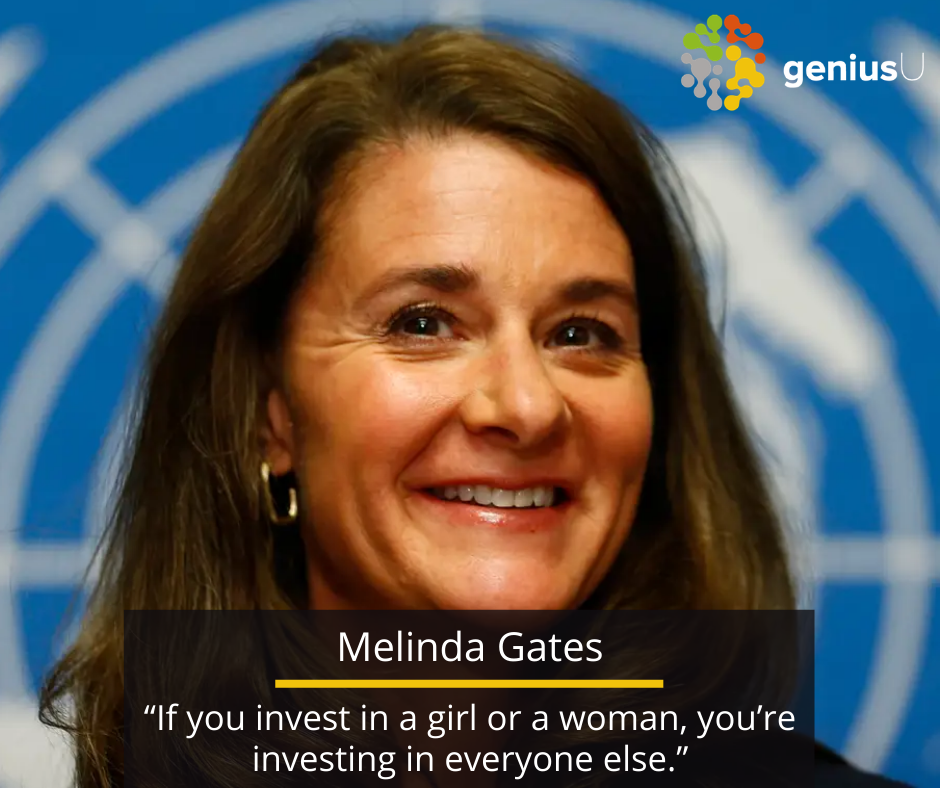 For Melinda Gates it is her want for a better, healthier, and equal world for all.

Melinda Gates is an American philanthropist and a former general manager at Microsoft. In 2000, she co-founded the Bill & Melinda Gates Foundation with her husband Bill Gates, the world's largest private charitable organization as of 2015. It aims at improving global health and education. Gates, also a philanthropist, took a job at Microsoft Corporation in 1987.

She started out as a product manager, primarily developing multimedia and interactive products. Over the course of her nine years working for Microsoft, Melinda worked her way up to general manager of information products.

In 1987 Melinda first met her new boss, Bill Gates, at a PC trade show in Manhattan. She found his sense of humor surprising and refreshing within the context of the corporate climate of the times. When he eventually asked her out with a couple of weeks' notice, she initially was put off by his over-planning but soon realized his busy schedule made spontaneity difficult. Accepting this, she agreed to a date.

In 2011, the Bill & Melinda Gates Foundation officially restated its mission as: "improving equity in four areas: global health, education, access to digital information via public libraries, and support for at-risk families in Washington State and Oregon."

In 2012 Melinda pledged $560 million toward improving access to contraception for women in third-world countries.

Melinda and her husband also remain committed to changing the state of education in the United States. Their foundation helps student fund their studies through the Gates Millennium Scholars program. As she wrote on her Facebook page, "Bill and I believe that education is the great equalizer.”

Melinda and Bill Gates also showed that they support progressive workplace policies. They announced that the employees of their foundation would receive up to a year's paid leave after the birth of a child or the adoption of a child.

In 2019, Gates debuted as an author with the book The Moment of Lift: How Empowering Women Changes the World. Former President Obama starred in a comedy sketch in order to promote it. The book highlights the failure to acknowledge women's unpaid work, drawing on feminist economist Dame Marilyn Waring's book If Women Counted.

Melinda Gates is a woman of strength and precision. Like all traders, she strives at finding flow in keeping the peace and keeping things on time. She is an inspiration for all women around the world who have a desire to fix the flaws in their surroundings and strive for growth.