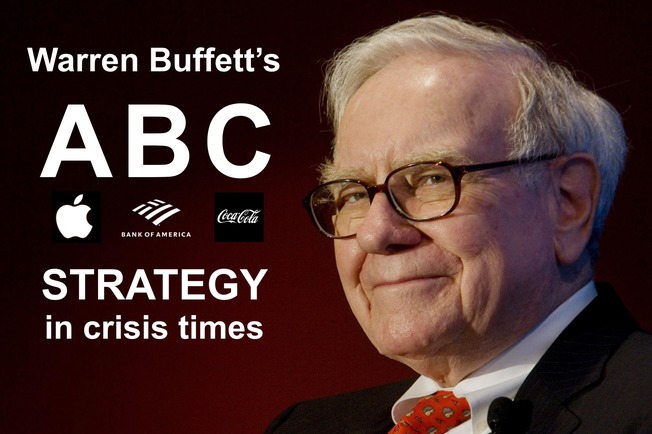 In 1993, Warren Buffett sat down for an interview with Supermoney author Adam Smith, and the conversation began like this:

Smith: “If a younger Warren Buffett were coming into the investment field today, what areas would you tell him to point himself in?”

Buffett: “Well, if he were coming in and working with small sums of capital I’d tell him to do exactly what I did 40-odd years ago, which is to learn about every company in the United States that has publicly traded securities and that bank of knowledge will do him or her terrific good over time.”

Today, Buffett has got as far as A.B.C. Literally. Over 70% of his entire $210 billion portfolio is in just four stocks:

A is for Apple: Buffett’s company Berkshire Hathaway owns $91 billion in Apple shares. That’s 43% of his portfolio. He has seen his stake grow by $18 billion this year alone, making him Apple’s second-largest shareholder.

B is for Bank of America: Buffett owns $22 billion of Bank of America. He first helped save the bank in the Global Financial Crisis in 2011, buying 5 million in preferred stock with the ability to buy more at a fixed $7.14 per share over the following 10 years. The shares are now at $22.74.

These three companies make up 63% of his portfolio. The fourth company? No, it doesn’t start with ‘D’. He went back to ‘A’ again:

He first bought American Express in 1963 during the ‘Salad Oil Scandal’ when commodities trader Anthony "Tino" De Angelis was caught passing off water barrels as 1.8 billion pounds of salad oil. AMEX, caught with exposed loans, dropped more than 50% in price and Buffett put more than 40% of everything he had at the time to buy the shares. Today he owns $18 billion in AMEX shares.

While in this crisis many experts are telling investors to diversify, Buffett says “diversification is protection against ignorance. It makes little sense if you know what you are doing.”

Buffett doesn’t diversify stocks, but he does diversify industries. These four companies are major players in tech, consumer goods, banking, and payments. Each with products or services used many times a day. This strategy, together with buying after the bottom of a crisis has meant if you had invested $1,000 at the time Buffett bought AMEX in 1964, you would have $27 million today.

Warren Buffett has had a lot of criticism lately for not selling or chasing the current bubble. In fact, at the beginning of this month, he had stockpiled a record $137 billion in cash.

Then this week he did his first deal in four years. After over 20 US oil and gas companies have declared bankruptcy during the crisis, he’s invested $9.7 billion in Dominion Oil.

As this crisis deepens, Buffett will keep buying. And those criticizing him for not moving fast enough will realize that in a crisis, slow and steady wins the race.