If you had a crystal ball to the future, what would you do with it? 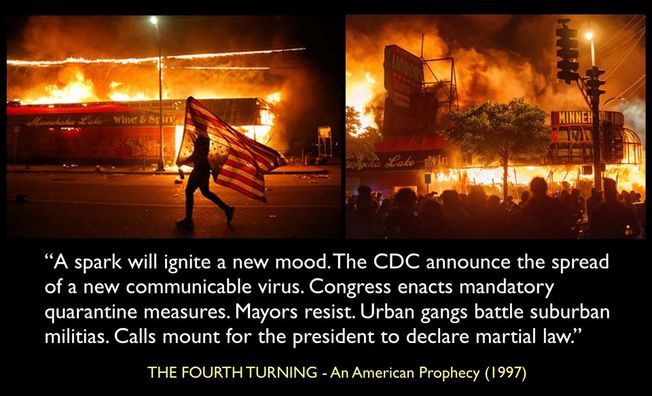 If you had a crystal ball to the future, what would you do with it?
The 2020 coronavirus and civic disorder crises we are seeing was predicted 30 years ago, and we're only in the first of five stages.

When William Strauss and Neil Howe wrote their book “Generations” in 1991, they showed how all modern history repeated in an 80 to 90 year cycle called a “Saeculum”.

Realising we were heading towards a once-in-a-lifetime crisis period, they then wrote “The Fourth Turning: An American Prophecy” to warn us of what was going to occur between 2005-2025.

While it’s a US focused book, the Fourth Turning applies to the world as a whole, and here is what it predicts in each of the five stages of the crisis:

STAGE ONE: THE SPARK

“At home and abroad, these events will reflect the tearing of the civic fabric at points of extreme vulnerability - problem areas where, during the Unravelling, America will have neglected, denied or delayed needed action. Anger at ‘mistakes we made’ will translate into calls for action, regardless of the heightened public risk.”

“The new mood and its jarring new problems will provide a natural end point for the Unraveling-era decline in civic confidence. In the pre-crisis years, fears about the flimsiness of the social contract will have been subliminal but rising. As the crisis catalyzes, these fears will rush to the surface, jagged and exposed.

Distrustful of some things, individuals will feel that their survival requires them to distrust more things.This behavior could cascade into a sudden downward spiral, an implosion of societal trust.”

“At some point, America’s short-term crisis psychology will catch up with the long-term post-Unraveling fundamentals.This might result in a Great Devaluation, a severe drop in the market price of most financial and real assets. As assets devalue, trust will further disintegrate, which will cause assets to devalue further, and so on

“Many Americans won’t know where their savings are, who their employer is, what their pension is, or how their government works. The era will have left the financial world arbitraged and tentacled; Debtors won’t know who holds their notes, homeowners who owns their mortgages, and shareholders who runs their equities - and vice versa. Before long, America’s old civic order will seem ruined beyond repair.

People will feel like a magnet has passed over society’s disk drive, blanking out the social contract, wiping out old deals, clearing the books of vast unplayable promises to which people had once felt entitled.”

“From this trough and from these dangers, the makings of a new social contract and new civic order will arise. This battle could be peaceful or violent, involving public and private militias. Decisive events will occur - events so vast, powerful and unique that they lie beyond today’s wildest hypotheses. Thus will Americans reenact the great ancient myth of the 'ekpyrosis'. Thus will we achieve our next rendezvous with destiny.

Armed confrontation usually occurs around the climax of the crisis. If there is confrontation, it is likely to lead to war. This could be any kind of war - class war, war against terrorists or superpower war."

“The economy will in time recover. Compared to today, it will be less globally dependent, with smaller cross-border trader and capital flows.

Emerging in this crisis climax will be a great entropy reversal, that miracle of human history in which trust is reborn. In a moment of maximum danger, that seed will implant and a new social contract will take root. For a brief time, the American firmament will be malleable in ways that would stagger today’s unraveling-era mindset.

The crisis climax will recede into the public memory - a heart-pounding memory to all who will recall it personally, a pivot point for those born in its aftermath, the stuff of myth and legend for later generations.”

According to Strauss and Howe, these five stages won’t be over until 2025, when we will enter the next first turning, and the beginning of a new world order.

At the time when they published the Fourth Turning, it was the Dotcom boom years. Most dismissed their work, except for the media and marketers who reported and profited on their predictions of the millennial generation. Even those who followed their work felt there was little urgency in the crisis prophecy as it was still decades away.

Now that the crisis is here, it’s time to pay attention and see our part in the great cycle of time.

Or we will lose our spirit, lose our minds, or both.

“All the forces in the world are not so powerful as an idea whose time has come.”
- Victor Hugo