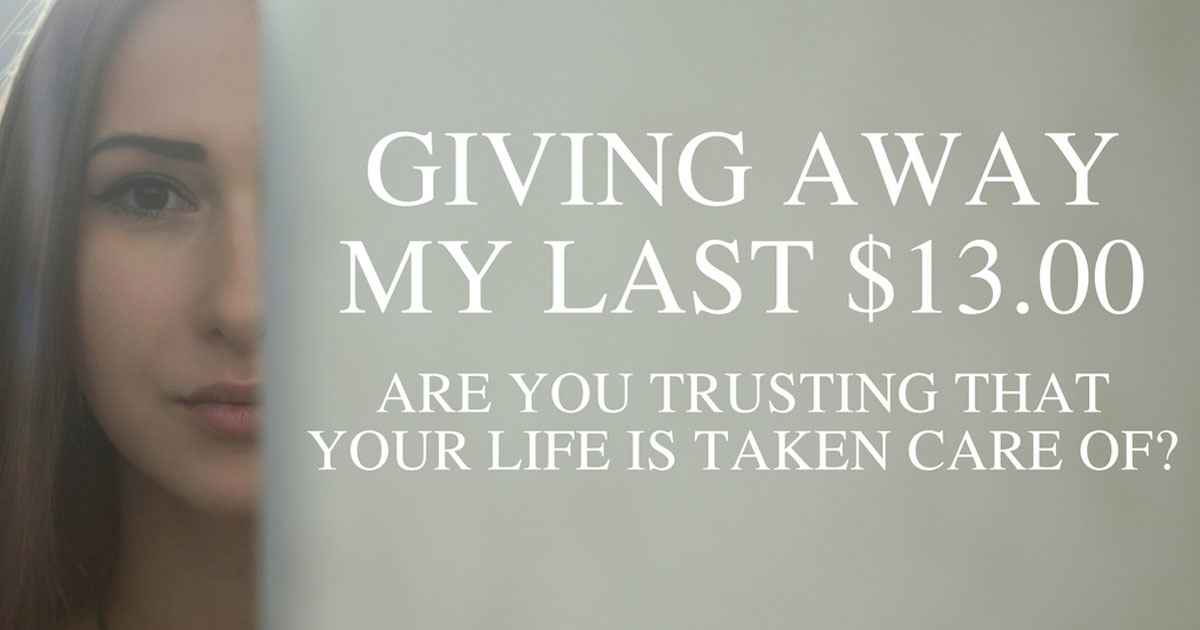 Sometimes you need to set up circumstances for yourself, so you can trust and experience that you are being taken care of!

Recently I was talking to one of my really good friends, and she was having a very hard time trusting that money would come to her. She had plans to fly from Japan to the United States, only staying in the United States for two days, then going to Spain on vacation.

I said to her, “You look tired! Why are you flying from Japan to the United States only for two days and then to Spain for your vacation?”

She said, “Well, I’ll be saving about a thousand dollars!”

She got real quiet and said, “Yeah”, so I said, “Well, one of the things that I think, and that I’ve been noticing, is that you’re always asking to be used, to be a vessel, to really be able to do whatever work is asked of you so that you can really be of service to the planet. Is that true?”

And she replied, “Yes, that’s my prayer.”

I said, “You know, most people insulate themselves, they play it really safe, they don’t take any risks whatsoever and they do that because they’re afraid that if they do take a risk, they’ll fail. And if they fail, they feel they may as well die and everything is a disaster!”

I went on, “But how do you grow and trust? How do you start to realize that what you don’t see is where things are really happening?”

She thought, and I told her, “What we can perceive is only about 20 percent of the world, what we don’t see going on and being organized is 80 percent of what is really happening. So how do you start to really trust that you’re being taken care of, if you’re always playing it safe, and you’re always insulating yourself and you’re never giving the universe or nature an opportunity to show you, ‘Look, everything’s gonna be A-OK!’ Especially if you’re taking care of you, everything is going to be A-OK! Because that’s the way life is designed.”

I said, “Let me tell you about a story of something that happened to me a long time ago”

In “The Passion Test”, I tell a story about how I followed this woman named Debra Poneman all over the United States. Because I wanted to be just like her!

She was a seminar leader who was so fabulous! I knew nothing about being a seminar leader and when I heard her speak for the first time, I thought, “Oh my God, she has to be my mentor!” So I followed her all over the United States. I’d sit in the front row of her seminars, first in Boston, then in Washington, then in Iowa, many different states and finally in Los Angeles.

She came up to me during her seminar in Los Angeles and said, “Alright already! You’re hired!”

But there’s more to this story that I didn’t tell everyone.

After she hired me, she said, “I want you to move to Los Angeles!”

I was living in Northern California at the time, but she said, “You can stay in my apartment, I have to go on a tour but you can learn all of my content while you’re staying in my apartment.”

So I packed all my stuff up and got in my little red car and started on my way to drive nine hours down to Los Angeles from Northern California. But about two miles on the freeway outside of the city, Palo Alto, my little red car blew up! So I ended up having to dump it and get on a train to Santa Monica, where Debra’s apartment was.

When I arrived at her house, I only had 13 dollars to my name. Debra was a very successful woman who had figured that I was fairly successful too. But I just put on this, “everything’s fine” show until she left on her tour. Obviously, I was not fine and I was freaking out because I didn’t have any money!

Eventually I told myself, “I’ve just gotta trust! So what should I do?”

I decided to get in her blue Chevy that she loaned to me, and I drove to a place in Malibu. It was the Great Saint, Paramahansa Yogananda’s ashram.

There were these beautiful grounds and beautiful benches where you could sit, meditative grounds where people could go and meditate. There were also little donation boxes near the seats on the grounds that I noticed.

As I was sitting there, meditating and praying “Please, help me! What should I do? Help! Help!” I got this hunch, “Take all of your money and put it in the donation box”

And I was like, “All of my 13 dollars that I have, put that in the donation box? Well, alright.”

So I put my 13 dollars in the donation box and started to head back. As I started driving down the Santa Monica freeway, I was became so mad at myself. I was thinking, “You looney toon, radical, weirdo! How could you give your last 13 dollars up? What were you thinking, you idiot!”

I really did that as I was driving.

It was my self talk that I did as I taught myself how to be a success seminar leader.

I got back to Debra’s apartment but was at an all-time low. I was totally broke!

But right as I was walking up the steps to her apartment door, I heard the phone ringing inside her apartment. I ran inside to get it, and it was my ex-husband’s father, Francis.

So I went, and as it turns out, Francis had just started this multi-level with this product called, “Herbalife”.

He told me all about it as we were having lunch and I said, “Yeah, it sounds really wonderful! I wish I could do it because it would be great, I do like people and it looks like a great product…. but I can’t.” Then he said, “Well, actually I brought 500 dollars worth of Herbalife that I’m going to front to you! You can have it, this is how you can start the next part of your business and do your seminar stuff too!” I was shocked, I was like, “You’re kidding me!”

And as he told me about some of the diet products, he set some products on the table. Then a bigger waitress walked right over, looked down and said, “What is that?”

So I said, “What do you mean, ‘What’s that?’ You don’t know about these products? These products help you lose weight!”

I told her, “It’s a hundred dollars” and right then and there, she said, “I’ll take it!”

So, the moral of the story is;

Be your own test-tube! I’ve done it my whole life.
There’s nothing more wonderful than having trust, courage, surrender, and knowing that everything is always working for you, not against you. Everything!